The move over law in Nevada details that drivers must move over for emergency vehicles, other vehicles, or pedestrians stopped on the side of the highway. All across the nation, there has been an increasing number of accidents involving police during routine traffic stops, emergency response technicians, and Department of Transportation (DOT) workers. The move over law and other similar types has been adopted in Nevada and more than thirty other states in an attempt to keep these individuals safe. 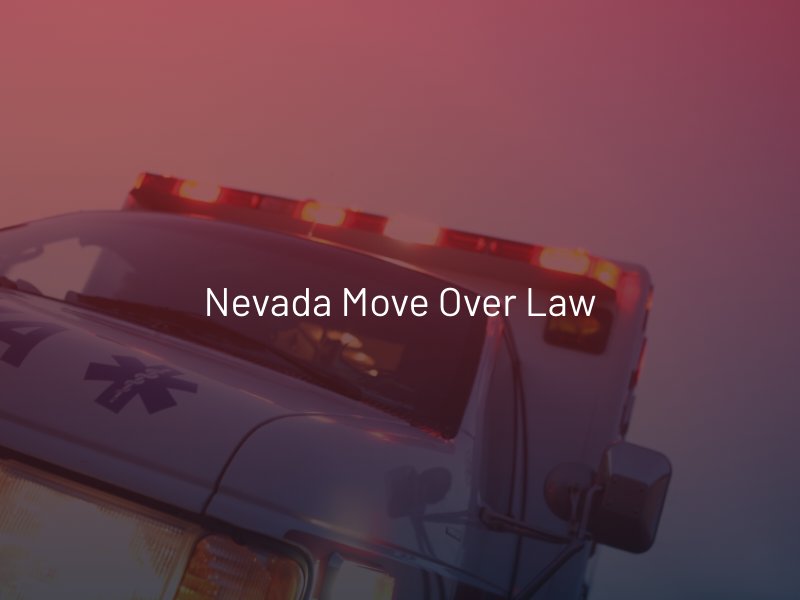 What is Nevada’s Move Over Law?

Nevada’s move over law (NRS 484B.607) requires drivers to decrease to a reasonable speed, proceed with caution, and move over to a lane that is not immediately adjacent to any traffic incident. That applies to:

This law is intended to create a buffer zone to protect moving traffic from a devastating motor vehicle accident. A violation of the state’s move over law is prosecuted as a misdemeanor, carrying penalties of a fine up to $395, four license demerit points, and possible jail time up to six months. The penalties can increase in severity if the violation results in injury or death.

While this may seem like a minor violation, a move-over conviction can come with significant consequences. Traffic violations may not be the only piece of evidence that can affect the outcome of a motor vehicle accident lawsuit, but failing to abide by Nevada’s move over law can hold significant weight in proving that the driver’s negligence was the reason for the crash. If one party can prove that the car accident would not have occurred if not for the other driver’s negligence (move over law violation), then the ticketed driver will most likely be held at-fault for the collision.

Under Nevada’s modified comparative negligence law, parties who share fault in an accident can still be eligible for compensation as long as they are not 50 percent or more to blame. A party that is more than 50 percent to blame for an accident, cannot recover for their losses.

Common Defenses to the Nevada Move Over Law

A potential defense if charged with failing to move over in Nevada would be that it was not reasonably possible for the driver to move into another lane. This could be blamed on traffic conditions or for safety reasons. However, even if a driver cannot move over, they must demonstrate that they slowed down to a reasonable speed and proceeded with caution.

It is also important to note that the move over law only applies when the stopped vehicle is flashing emergency lights, or the amber, and blue lights. If the emergency lights were not activated and a driver receives a ticket, an attorney can argue for a dismissal of the charge.

If you or someone you love was involved in a motor vehicle accident that involved a Nevada Move Over law violation, you may want to consult with an experienced Las Vegas car accident attorney before proceeding with your claim. Contact Harris & Harris Injury Lawyers at (702) 384-1414 today to schedule your free consultation.