Are Pit Bulls Allowed in Nevada?

Many states allow local governments to pass laws that ban pit bulls and other “dangerous” dog breeds within their borders, but not Nevada. In 2013, Nevada was the 14th state to prohibit breed-specific legislation by local governments. That being said, under Nevada’s dog bite laws, a specific dog can still be forcibly euthanized if the animal is considered dangerous or vicious. 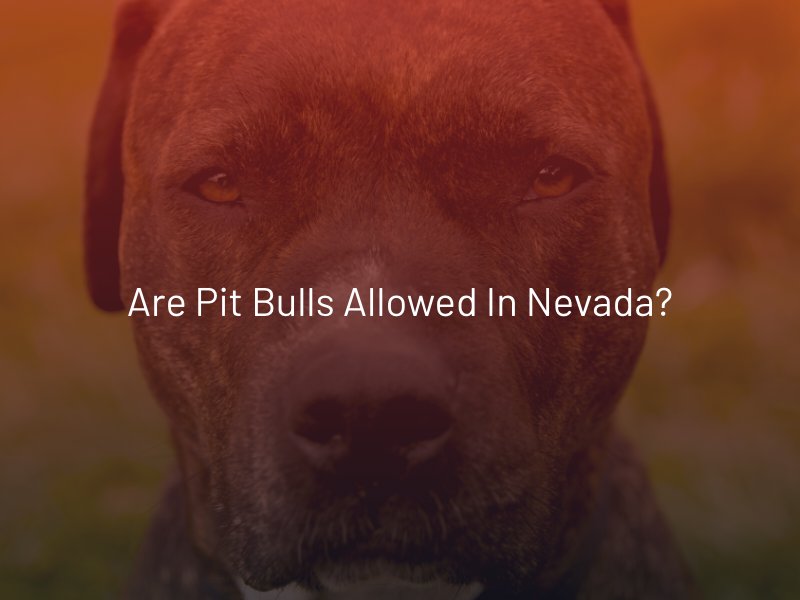 “Without provocation, on two separate occasions within 18 months, it behaved menacingly to a degree that would lead a reasonable person to defend himself or herself against substantial bodily harm, when the dog was:

A dog is considered “vicious” if:

“ Without being provoked, it killed or inflicted substantial bodily harm upon a human being; or

After its owner or keeper had been notified by a law enforcement agency that the dog is dangerous, the dog continued” dangerous behavior.

Law enforcement also has the right to declare a dog dangerous if used in the commission of a crime. However, dogs cannot be “dangerous” or “vicious” solely based on their breed or if they were being provoked.

In Nevada, you can keep a “dangerous” animal, but certain safety precautions must be taken, which typically includes:

It is illegal for an owner to keep or give away a “vicious” dog in Nevada.

Nevada does not have concrete dog bite liability laws that state who is responsible for a dog attack. Because of this, liability is determined by common law. In many cases, the dog’s previous behavior, if any, is taken into account. Owners are not automatically responsible for a dog bite if their pet has never attacked anyone before. On the other hand, if the dog’s owner is aware or has reason to believe that their dog has bitten someone previously, they will typically be liable for further incidents. Often, the state’s law on comparative negligence will apply, which assigns blame to both parties involved, and a victim’s percentage of fault can reduce their compensation.

Las Vegas has dog bite laws that are a little different than the rest of the state. Dogs are prohibited between Sahara Avenue and Sunset Road between the hours of noon and 5 a.m. If a dog attacks a person within city limits, the owner must report the incident to Las Vegas Animal Control, who will then place the dog in isolation for 10 days. This is to ensure the pet does not have rabies or another type of disease. Once this time elapses, the dog will be declared “dangerous,” and the owner will be put on notice. Unless the dog is already considered “dangerous,” at which point the dog will be classified as “vicious,” and the owner may be subject to civil and criminal litigation. The state may also choose to euthanize the dog.

Pit bulls and other similar dog breeds have gotten a bad reputation over the years, but it is illegal for a city in Nevada to prohibit owning a pit bull. If you have questions about the state’s dog bite laws or were a victim in a dog attack, speak to a Las Vegas dog bite lawyer today. We offer free consultations; reach us online today.